I made this cocktail for the “speakeasy” theme at Birmingham Museum of Art’s monthly “Art After Five” event.

I had been looking through some old cocktail books and found references to a no-longer-available product called Hercules. Being a curious type of person, I started doing research and found that I wasn’t the first people to go looking for this product. To make a long story short, it was an aperitif wine that was flavored with yerba mate.

Now, I first heard of yerba mate when I was in college and read 100 Years of Solitude by Gabriel Garcia Marquez for the first time. Characters in South American novels drink mate all the time, and I wanted to know more. Back then, it wasn’t an easy product to get, but I did find some at the local health food store, along with the hollow gourd and metal straw traditionally used to drink the tea after it is brewed. Now, you can find yerba mate at almost any grocery store.

I thought at first that I might infuse the yerba mate in an aperitif wine, but I thought it would be safer to make a syrup from it. Then, if it didn’t turn out well, I hadn’t ruined a good bottle of anything–just wasted some sugar. The syrup was so delicious that you could almost drink it by itself. In fact, since I have some left over from the event at the museum, I’ve been using it to make rum and tequila old-fashioneds at home. 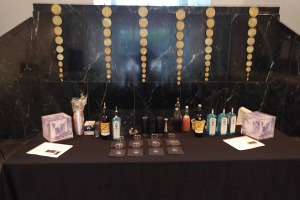 To make the syrup, just do a simple syrup with equal parts sugar and water. When it comes to a boil, stir briefly and then let it cool off. While it is still hot, for each cup of water, add a tea bag of yerba mate and let it steep for ten minutes. Remove the tea bags, let cool, and bottle.

For the aperitif, I went with Bonal. Because of its pungent, earthy qualities, I thought it would blend well with the yerba mate. It was easy to imagine that the original Hercules product might have been similar to Bonal with yerba mate added in.

One of the yerba mate products you can buy now in many stores is a soda that includes grapefruit and ginger. I had one of these recently and thought it was a good flavor combination to try with my cocktail. My early experiments using ginger in this cocktail, however, didn’t turn out quite like I wanted them to, so I abandoned that and just went with fresh grapefruit juice. 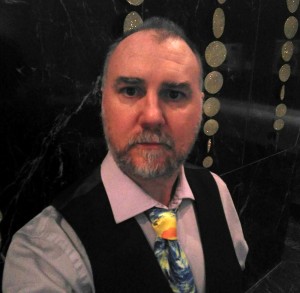 Since the event had a speakeasy theme, I used gin as the base. When I think of the 1920s, I think of gin first. I used Bombay Sapphire because of the high proof and because the particular botanicals used in that product a great for herbal cocktails.

I named the drink after a short story by Jorge Luis Borges, another nod to the South American roots of yerba mate.

Shake and strain into a cocktail glass. Garnish with a slice of grapefruit peel.