The Last Word is a pungent, sweet, and sour Prohibition-era classic. It was invented at the Detroit Athletic Club during Prohibition and was originally made with bathtub gin. The strong flavors of Chartreuse, lime, and maraschino liqueur were basically there to cover up the taste of the bad gin.

Most folks today make this with a London Dry gin like Bombay Sapphire. However, at the Zig Zag cafe in Seattle, which was resonsibile for the modern resurgence of this cocktail, they make it with a house-made “bathtub gin” that has stronger spice and citrus notes. So we tried making with our own house-made Old Tom, which makes it a very different animal. Both versions are really good in their own way though. 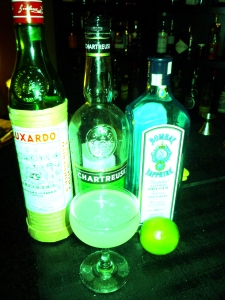 Shake and strain into a coupe glass.

We should also mention one very popular variation called the Final Ward, which was invented by a New York bartender named Phil Ward. Ward substitutes rye whiskey for the gin and lemon juice for the lime. What variations can you imagine?