In addition to documenting tastings, recipes, and house experiments, we would like to begin profiling some Birmingham bartenders on this site. Our inaugural interview is with Feizal Valli, the bar manager at the recently opened Collins Bar on 2nd Avenue North, where I’ve been invited to do some guest bartending in 2014 (more on that in a later post).

One of the more colorful characters we have met during the course of our cocktail adventures, Valli got his start in the bar business in a strip club on Bourbon Street and then opened his own bar in Capetown, South Africa, before ending up at some of Birmingham’s finest bars and restaurants.

Valli was working a “desk job” in New Orleans when his employers rented out the top floor of a strip club on Bourbon Street during Mardi Gras, and he ended up being the point man for the bar management. A few days later, he happened to run into the owner on the street, and the owner asked him if he knew any bartenders. Even though he had never bartended in his life, he said he was a bartender just for the experience of working at a strip club on Bourbon Street. A weekend of cramming and a generous bar manager helped get him through.

Some of Valli’s experiences in Africa would be better suited to exploration in my other vocation as a novelist, and we’ll leave it at that for now. For various reasons that must remain mysterious, he closed his bar after two and half years and returned to New Orleans, landing a job at Emeril’s NOLA. It was Hurricane Katrina that brought him to Birmingham, seeking refuge from the storm. He started at Highlands then went to Cafe DuPont to 26 to Hot & Hot Fish Club. When Andrew Collins wanted to open a nice cocktail bar downtown, Valli’s name kept coming up in conversation as someone who could run the bar. Valli also designed the interior of the bar, including the kinetic sculpture of paper airplanes hanging from the ceiling and the Birmingham-centric periodic table of elements behind the bar. 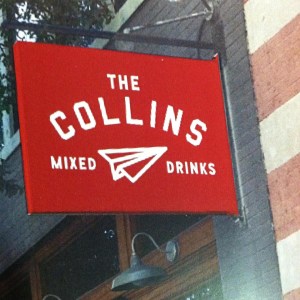 The concept Valli created for Collins Bar is simple and elegant. There is no cocktail menu. He says, “If you figure out the drinker, you will figure out the drink.” Valli spends time getting to know his customers and designing cocktails customized to specific tastes. In addition, he has some of the heaviest hitters in the Birmingham cocktail scene behind the bar, including Angel Negrin and Josh Schaff.

Another unique angle at Collins Bar is the guest bartending program. Valli says, “Guest bartenders are made up of people who have at least some experience behind a bar but it mostly it’s about how passionate they are about cocktails and how much knowledge they’ve already acquired on their own. Sometimes it’s a nobrainer like Josh Schaff or Steva Casey, people who run their own bars but just want a change of scenery one day a week or it’s someone relatively new like Claire from Octane who’s just a natural at it. In the end it’s someone who in my gut I know cares enough about cocktails and service that I know I can trust them behind my bar. ”

(And did I mention yours truly will be doing a guest slot there this month?)

Two years ago, Valli won the GQ/Bombay Sapphire Most Inspired Bartender contest in Las Vegas. (This year, it went to another Birmingham bartender, Charley Pinck). Last year, Valli was the only bartender from Alabama invited to Atlanta’s Food and Wine festival, where he ended up in a “Bartender Throwdown.” He was paired with Greg Best from Holeman & Finch Public House for the competition, and they won.

What’s in your well?

A bartender’s well contains their go-to bottles. What’s in a bartender’s well says a lot about their personality. Valli has several sweet ingredients in his well, including St. Germain, Domaine de Canton, and Cathead Honeysuckle Vodka. He points out that Angel Negrin’s well is almost the opposite, with bitter liqueurs like Fernet Branca and Cynar. “Angel is like the Lennon to my McCartney,” Valli says.